The below cameras will refresh every 40 seconds 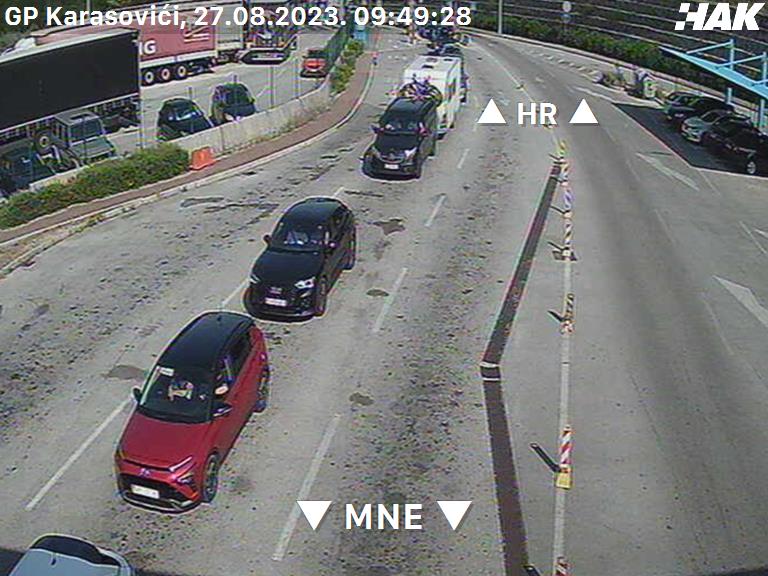 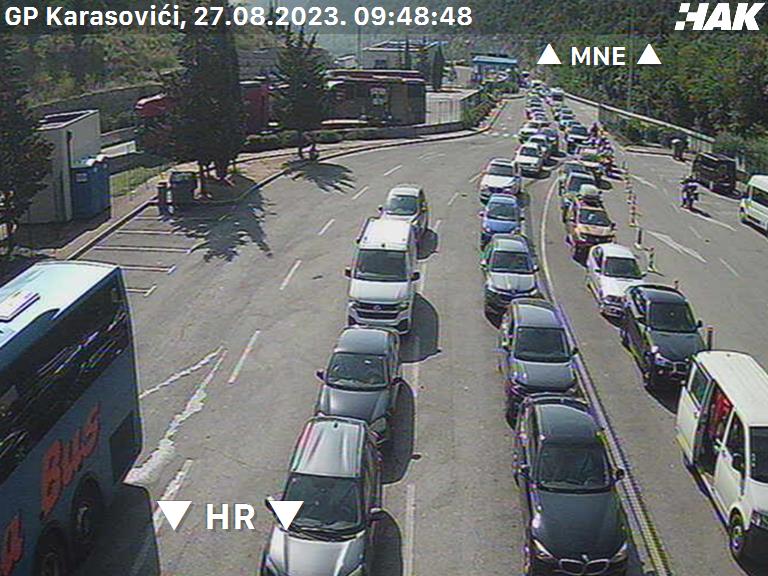 Debeli Brijeg is the main Montenegrin border crossing with Croatia. Debeli Brijeg is in Herceg Novi municipality about 6 km from Igalo.
The Herceg Novi municipality stretches from Prevlaka to the Verige strait. An almost unbroken string of towns lie along this strip of coast, these include Prevlaka, Igalo, Herceg Novi, Baošići, Đenovići, Meljine, Zelenika, Sutorina and Bijela. Municipality is located at Adriatic coast in southwestern Montenegro, at the entrance to the Bay of Kotor and at the foot of Mount Orjen. Herceg Novi is one of the major tourist destinations in Montenegro. It is well known as a spa and health center; nearby Igalo has an abundance of healing sea mud called "igaljsko blato" (Igalo mud) and mineral water springs called "Igalo water springs". The most famous tourist attractions in Herceg Novi are castle Forte Mare built in 1382, a clock tower built by Austrians in the 19th century, the Kanli tower built by Turks, and the Serbian orthodox church of St. Michael Archangel in central Belavista Square. Whilst the city itself is not a major destination for sunbathing, with no long sandy beaches along the rest of the Bay of Kotor, many beaches are reachable by boat. Popular Luštica peninsula beach sites include Žanjic, Mirište and Rose. Border crossing Debeli Brijeg / Karasovići / Montenegro and Croatia. Montenegro checkpoint Debeli Brijeg.

Karasovići (Karasovici) The Croatian checkpoint is known as Karasovići. It is located on the Adriatic Highway (Jadranska magistrala).There are three major roads from the Adriatic Highway to inland Montenegro – at Budva, via M-10 to Cetinje, at Petrovac, via M-2 to Virpazar and Podgorica, and at Sutomore, via the Sozina Tunnel (M-1.1), also to Virpazar and Podgorica. Adriatic Highway (Croatian: Jadranska magistrala) is a road that stretches along the eastern coast of the Adriatic Sea and is part of the European route E65. The road passes principally through Croatia, with smaller stretches through Bosnia and Herzegovina and Montenegro. It is an undivided two-lane road for almost its entire length, with the exception of a short stretch through Zadar and a 24 kilometres (15 mi) dual-carriageway section from Plano (Trogir) to the southeast suburbs of Split. The dual carriageway is planned to be extended further southeast to Omiš. Completion of the Adriatic Ionian motorway is proposed in order to replace the Adriatic highway as a high-performance road transport route along the Adriatic coast. Adriatic Highway runs along the east coast of the Adriatic Sea and passes through three countries: Croatia, Bosnia and Herzegovina and Montenegro. Most of the highway is located in Croatia. Border crossing Karasovići / Debeli Brijeg / Croatia and Montenegro. Croatia checkpoint Karasovići.

Worldwide, WebBased Service for online traffic cameras, used to monitor traffic flow and road conditions.The purpose of the Cameras is for staff to monitor traffic flow, road and weather conditions and to look for and manage accidents and incidents on major roads.Position cameras in a manner conducive to viewing precise traffic data to be provided by CCTV traffic monitoring systems that are usually integrated with road infrastructure.
These Online traffic cameras also can help drivers save time, can help keep you calm on the road ,mitigate traffic jams , and even save lives.